If data is the new black gold, then surely no computer should be in use without a proper antivirus program first installed. And even though we still refer to antivirus software as anti-“virus” software, we’re nowadays more likely to fall victim to identity theft and/or some other dubious cyber crime than to an actual data-destroying virus. Ransomware installed on big-business systems not only has the potential of wrecking havoc on sensitive information but can even lead to expensive legal litigation as a result of damages suffered.

Antivirus software today therefore focuses more on malware and ransomware than on the typical data-erasing virus. This is because there remains a whole lot of money to be made out of those ignorant about data-protection – which really is all the more reason to invest in good-quality antivirus software.

At around $59.99 per year for a licence covering three devices, Kaspersky is essentially high quality value of very little money. And since the independent antivirus testing labs all recommend Kaspersky as a premium antivirus product, we’re confident in our initial highly positive rating of the product.

Not only does Kaspersky carry the independent-lab stamp of approval, but it also scored either at the top or very near the top of the majority of “best antivirus” lists. Kaspersky offers a free as well as a paid version – with the paid version making use of the same exact core version utilised by the free version. This alone makes Kaspersky a winner in our books. The paid edition may however be preferable to some as it includes access to a specialised “vulnerability scan”, as well as to 24/7 access to the relevant tech support. It even comes standard with a special on-screen keyboard designed specifically for the purpose of offering protection against keylogging spyware. 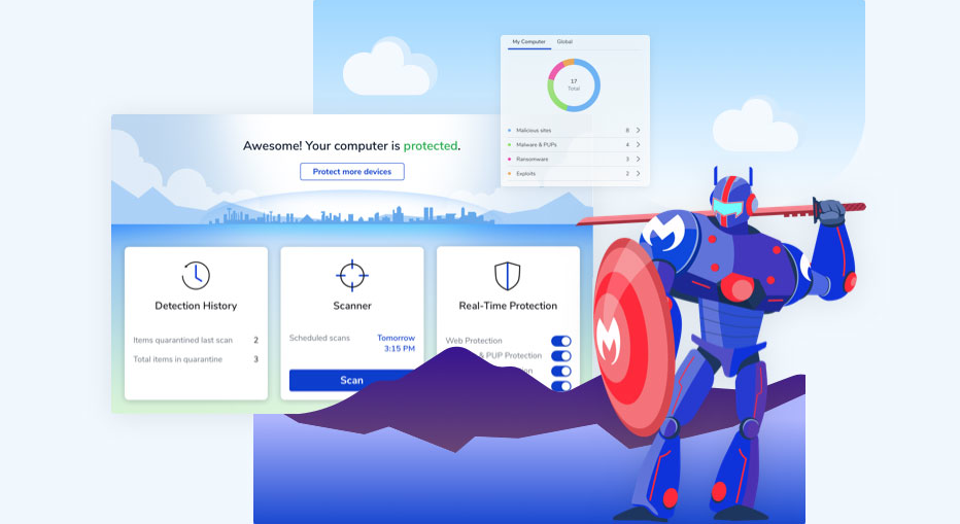 What makes Malwarebytes a product especially relevant to modern-day data challenges is that it was a malware protector first and is now an antivirus program second. Malwarebytes is therefore no longer a “second-line” or “backup” line of protection, as what was the case earlier on.

Malwarebytes Premium offers sophisticated protection against malware and trojan-horse software simply by “looking” at files about to be downloaded or received. This is critically important in terms of the typical layered protection offered by most leading anti-malware software brands.

More good news is that Malwarebytes, not unlike Kaspersky, costs a very reasonable $79.99 per year for a total of 5 devices enjoying premium protection. The product-line also includes a Sophos Home Premium version priced at only $50 per year – a product that can be installed on up to 10 home-based devices running either Windows or macOS.

McAfee’s single-subscription Antivirus Plus product will protect several Windows, macOS, iOS and Windows devices for a cool $19.99 per year. McAfee is by far the best value for money out there.  Some of the features may be thin for the wea on devices running macOS and iOS, but iOS users still get way more out of the deal than with most other products.